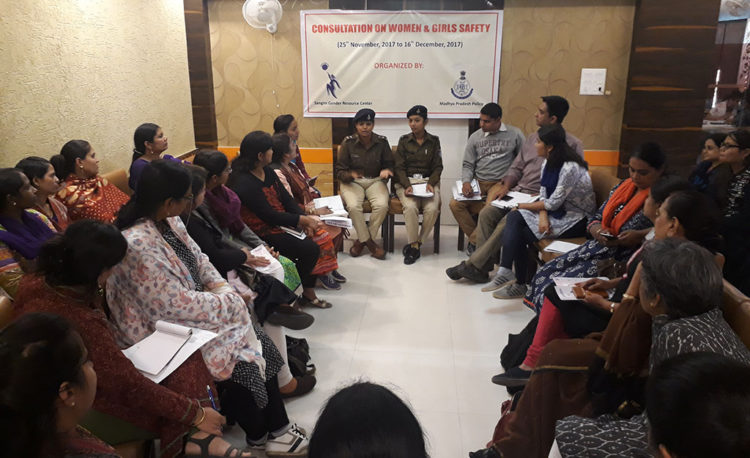 Sangini has networking with various civic bodies, CBOs, social groups, social workers, public representatives of state and national level. As Sangini believes in the phenomena of ‘being together means being stronger’.

Women and girls victims formed a group where Sangini boost their leadership qualities and   skill upgradation so that they can work confidently against any sort of violence and even capable of helping other women and girls suffering from the same. As a result, they are collectively fighting for their rights, space and identity. They are in the form of forum. They understand legal process of justice, discriminatory social structure and above all politics of male dominant society.

Sangini formed Domestic Workers Forum in 2006 as Domestic Worker Women’s Rights Association. This forum provide platform to domestic workers where they can collectively raise their voice. Through this forum, the work of bringing domestic workers on one platform and raising their voice like working hours, equal pay for equal work, weekly off, minimum wages, working conditions, safety and dignity at the workplace was done.

Domestic workers have also been doing the work of advocating with the government and employers from time to time to fight for their rights. Not only this, these women have also advocated with other workers’ organizations in other States.

We believe that it is not enough to just keep fighting for their rights, but also need to make ourselves responsible for our job. For this, domestic workers are constantly improving on factors such as skill development, personality development, mannerism and accountability towards employers.

Sangini has also trained women as instructors to teach other women and now, they are living their lives with respect. These are the women who were hesitating to learn earlier and now they are working, having the confidence to teach others as well. Some of our women now are working in the organized sectors like hotels, agencies, etc., through which, while breaking the traditional roles of women, the focus is on equality based roles and employment, under which we have trained women drivers to drive cars, auto rickshaws, vans etc.

We have also been continuously demanding from the Government to enact laws for security, dignity and wages for workers to ensure their rights.

There has been networking with various national networks working on women and gender issues in various thematic areas of gender and law, gender and health and other interfaces of women and gender issues. Sangini is working in collaboration with various departments on women safety issue including police department, labour departments, municipal corporation, legal aid and women and child development. Sangini actively participated in various campaign run by the government departments. Sangini has been awarded by the municipal department as brand ambassador to cleanliness drive. Campaigns are being conducted by the police department for the safety of women like Women Safety App. Along with the issue of eve teasing in public transport, we have also worked with organizations like Traffic Police, Bhopal City Private Link Limited, EMBARQ, various campaign run by the Women and Child Development like women safety, beti bachao beti padhao (save daughter teach daughter), lado abhiyan (girl campaign), etc.